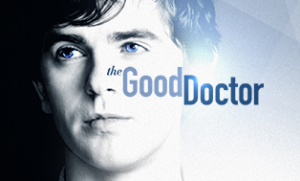 THE GOOD DOCTOR, Monday 10-11PM ABC, Dr. Shaun Murphy is a young man with autism and savant syndrome who is brought to San Jose St. Bonaventure Hospital by Dr. Glassman to be a surgical resident.  If a terrible accident hadn’t shown a spotlight on Shaun’s amazing medical abilities, the hospital would undoubtedly not have taken on an autistic doctor.  Shaun’s next challenge will be to convince his fellow doctors that his autism can be a valuable asset, not something to be treated as a disorder.  COMMENTS:  The Good Doctor was our favorite new drama for several reasons.  Freddie Highmore, as Shaun, is instantly likable and plays his character well.  Richard Schiff brings even more passion to Dr. Glassman than he did to Toby in The West Wing.  The Good Doctor is, at its roots, a medical procedural done very well, with obscure ailments and a variety of big personalities.

Best New Comedy:  ME, MYSELF AND I, Monday, 9:30-10PM CBS, This show follows the life of Alex Riley through three very different stages in his life  – teen years, midlife, and newly retired.  Jack Dylan Grazer, Bobby Moynihan (Saturday Night Live) and John Larroquette (The Librarians, Night Court) share the role of Alex Riley.  COMMENTS: Young Alex is bit of an awkward teen and viewers see how a decision made at the age of 14 can have a ripple effect throughout life.  Harmelin reviewers agree that this is the best comedy among this year’s broadcast crop and should get an early full season pickup by the network.

Best Mid-Season Comedy:  Splitting up Together ABC Starring Jenna Fisher (The Office) and Oliver Hudson (Rules of Engagement) is about a couple who has grown apart and decides to divorce.  For the sake of their kids and finances, they live on the same property and shared custody means taking turns living in the house.  I laughed and I teared up watching them start over and rediscover themselves, their family and even each other.

Best Mid-Season Drama:  RISE NBC From Jason Katims, writer and executive producer of Friday Night Lights and Parenthood, and Jeffrey Seller, producer of the Broadway hit Hamilton, comes a new drama about finding inspiration in unexpected places. When dedicated teacher and family man Lou Mazzuchelli (Josh Radnor, How I Met Your Mother) sheds his own self-doubt and takes over the school’s lackluster theater department, he galvanizes not only the faculty and students, but the entire working-class town. Inspired by a true story.

Worst New Drama:  KEVIN (PROBABLY) SAVES THE WORLD, Tuesday 10-11PM ABC, It’s not every day a messenger from God arrives in the form of a meteor to tell you you’re one of the righteous.  Right?  That’s what happened to Kevin (played by Jason Ritter) who most definitely doesn’t feel like one of the righteous, or a little bit spiritual, or even very caring.  And now he finds out that he protects humanity just by existing and that there should be 35 other souls like him but mysteriously there aren’t.  He has to figure out why while he also builds his spiritual power.   COMMENTS:     I love Jason Ritter.  That’s about all I have good to say.  Maybe this is just a poorly done pilot because it didn’t convey what the series will be like.  It was just one awkward interaction after another with way too many holes in the storyline.  On the other hand, it’s possible that maybe the review team here is just a group of hardened, mid-Atlantic urban types who couldn’t appreciate the warm “meaning of life” plot.

Worst New Comedy:  9JKL, Monday, 8:30-9PM CBS, Mark Feuerstein (Royal Pains) executive produces and stars in this comedy based on his own experiences.  After his acting gig ends and his marriage isover, Josh must return to his hometown and live an apartment between his parents’ (played by Elliott Gould and Linda Lavin) and his brother’s apartments. COMMENTS:   This comedy gets the benefit of Big Bang’s audience until the end of October when Kevin Can Wait returns to Mondays at 8PM.  Although it has a talented cast, the program was mediocre and might struggle to find a fan base large enough to maintain a residence on CBS.

Surprise Hit:  THE ORVILLE,  Thursday 9-10PM FOX, Venture 400 years  down the road with Seth MacFarlane on camera. This drama/comedy is like a spoof of Star Trek with MacFarlane running a spaceship (The Orville) with a human and alien crew dealing with space age problems. He also deals with issues of today problems as he recovers from a painful divorce.  COMMENTS: Fox is definitely banking on MacFarlane’s comedic Sunday night run to mix in drama and sci-fi for this Thursday evening newbie. His spaceship crew includes Adrianne Palicki (Friday Night Lights), Chad L. Coleman (The Wire), Scott Grimes (ER) and Halston Sage (Neighbors).