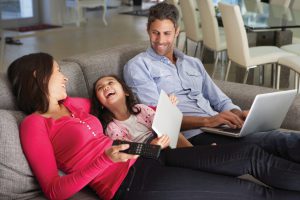 Our 23 previous editions focused on advertising-supported networks (and more recently, Hulu). This year, due to the dramatically changing landscape of video content providers, we have included additional streaming services that are ad-supported, such as YouTube and CBS All Access, and those that are non-ad-supported, such as Netflix and Amazon Prime Video.

The amount of available video content has increased significantly over the years. There were 209 scripted shows in 2009 and in 2018 there were 495. The streaming services have now surpassed the broadcast networks with 160 new shows versus the broadcast networks with 146, 144 for basic cable and 45 for premium cable. This past 2018-19 season, the broadcast networks renewed 12 of their new shows, which is the lowest number in the past few years. While people are spending more time watching video, the amount of content has led to fragmented ratings and the networks do not have the patience to stick with shows that are not performing well and somewhat ironically, TV shows that have been cancelled by the networks have been picked up by streaming services. Last year, Netflix picked up FOX’s Lucifer and ABC’s Designated Survivor. That trend will continue with ABC’s Whiskey Cavalier, NBC’s A.P. Bio and Amazon Prime Video’s Sneaky Pete all being pitched to other networks or platforms.

This coming season, the networks will premiere 17 new shows in the fall (nine dramas, seven comedies and one reality show). Additionally, 17 shows will be introduced at various points throughout the season.

Remakes and spin-offs continue to be a resource for the network schedules, although they are not always successful as Murphy Brown (Candice Bergen) will not be returning. However, Magnum, P.I. and Charmed will both be back. Kids Say the Darndest Things, which last aired on CBS in 2000 with Bill Cosby, will now be hosted by Tiffany Haddish (The Carmichael Show) on ABC. CW will resurrect Nancy Drew, last seen on ABC in 1979 starring Pamela Sue Martin, this time with Kennedy McMann in the titular role.

ABC aired live remakes of All in the Family with Woody Harrelson and Marisa Tomei and The Jeffersons starring Jamie Foxx and Wanda Sykes.

A poll by website Gold Derby revealed that the next remakes fans would like to see are Happy Days and Laverne & Shirley.

Please enjoy this preview of the upcoming television season (network, cable and streaming) – we hope you can find time to watch some of the 500 shows that will be airing this year!