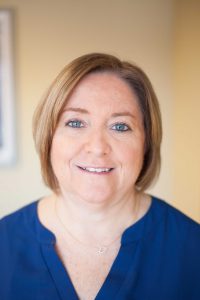 As the Head of Harmelin’s Broadcast Traffic Department, Maggie Machalowski has helped guide our company through the ongoing TV and video evolution, using her expertise to seamlessly merge digital and traditional processes. It was 2013 when Harmelin recognized the benefit to our clients if we were to start our own broadcast traffic department. Lyn Stricker, EVP/Managing Director, recalls Maggie being the “natural choice to lead the new team.”

Recently Maggie celebrated her 15-year anniversary with Harmelin. We sat down with her to discuss her successes and inspirations both personally and professionally.

My philosophy towards work is to give 110% effort.  I always strive to contribute my best abilities and utilize my years of varied experience to reach the goal at hand.

The biggest notable change I have seen in the industry is the growth and advances in technology.  We now have access to so many new and exciting ways to reach consumers that weren’t possible in 2004.  Most intriguing for me is the ability to stream programming through sites like Netflix and Hulu and to target consumers 24/7 due to accessibility on mobile devices.  In 2004 a cell phone was just a flip phone used for making calls.  Today, use of smartphones has completely changed the way we work and play!

My all-time favorite TV show would have to be Seinfeld, the show about nothing. It provided water cooler talk and iconic phrases that have remained part of our vernacular to this day!

If you were stranded on a deserted island, what three things would you have and why?

If I were stranded on a deserted island, I would want to have my Bible, a picture of my family and a very large knife!  The knife would be for finding/securing food as well as for keeping myself safe.  The picture of my family would be a reminder that I have a large, loving family waiting for me.  And my Bible is a constant source for encouragement and hope.

I think the person who has most inspired me in my life was my father. The older I get, the more I appreciate how hard he worked to provide for and protect our family. Dad was true to who he was, he wasn’t easily influenced by others and didn’t place importance in what others thought about him.  He and Mom raised a large, close knit family and gave us everything that they could afford to give us, which was always more than enough.  We may not have had the best of things, but we always had one another and knew that we were loved!

Lyn Strickler, EVP/Managing Director, remembers when Maggie first came to Harmelin Media from her role at WTXF-TV as a promotions coordinator. At WTXF-TV, Maggie gained experience in broadcast trafficking among her other responsibilities at the station. Lyn says Maggie “quickly became a strong broadcast buyer at Harmelin, working across TV, cable TV and radio to activate our clients’ campaigns. Since its inception in 2013, Maggie has grown the traffic department to three team members working with about 70 clients. Now she is guiding the team through the current video evolution, incorporating trafficking for digital video on outlets such as Hulu, CBSInteractive, and Gamut Media. Lyn says it best: “We appreciate Maggie’s leadership and loyalty throughout the past 15 years!”

Irene Neveil, Vice President, has nothing but praise for Maggie and the traffic team. “As the head of Harmelin Media’s traffic team, Maggie runs a tight ship.” Irene goes on to say that under Maggie’s leadership, “We receive bulletproof service for creative trafficking.” Irene especially thanks Maggie and her team for “making Fridays and weekends stress-free, thanks to never needing to be concerned about this hugely important function of our business.” She goes on to say, “I am grateful as well to have had Maggie as my co-worker, neighbor and friend for many years, even before our time with Harmelin. Congratulations to Maggie on achieving this milestone!”

Thank you, Maggie, for your continued leadership and dedication, and congratulations on achieving 15 years!