Millennials Aren’t as Hard to Reach as You Think 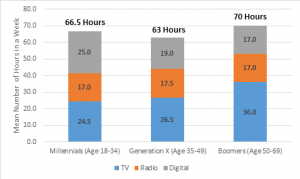 Millennials Aren’t as Hard to Reach as You Think

Why are Millennials seen as an elusive group to effectively target with media?

Other than newspaper readership, Millennials are on-par with other generations’ media consumption.  According to the GfK-MRI Fall 2015 Survey, Millennials read just 11 newspapers per month compared to Gen X’s 14 newspapers and the Boomers’ 18.  However, Millennials spend more cumulative time with TV, radio, and digital media than Generation X while each generation reads an average of nine magazines per month.

Nielsen studied Millennial TV viewership in their Q4 2015 Total Audience Report.  They found that TV viewership was tied to the life stage, rather than the age, of the Millennial consumer.  They broke Millennials into three groups:

Nielsen found that all three Millennial groups spend at least two hours per day watching live TV and at least one hour per day watching a TV-connected device, such as Apple TV, Roku, Chromecast, or a video game console.  Those ‘Starting a Family’ watch the most live TV and the most TV overall at 4 hours and 40 minutes per day.  Those ‘On Their Own’ consume the least amount of live TV and the least amount of TV overall with 3 hours and 38 minutes per day. 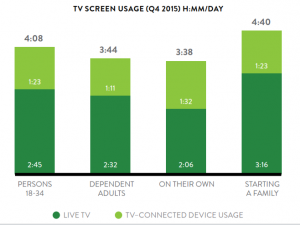 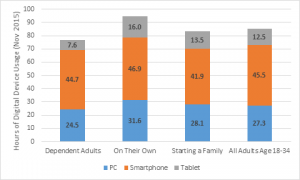 What does this mean for marketers?