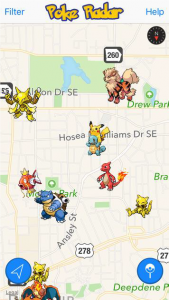 Pokémon GO is a mobile game released in the U.S on July 6, 2016 by Niantic, Inc. Within two days it became the most downloaded app in Apple’s App Store and in Google Play. Also within two days, it had almost as many daily active users as Twitter. Niantic is a company that is partially owned by Alphabet, the parent company of Google, and it licenses the Pokémon trademark from a Nintendo-owned company, which is also an investor in Niantic. The game itself is built on the concept of Augmented Reality, or AR. AR is similar to Virtual Reality (VR), but while VR games place the participant in a completely different environment, AR games merely enhance the participant’s actual physical environment. As such, Pokémon GO has taken aspects of the popular Pokémon card game and has superimposed it on the map of the world.

Here’s a rundown of the key elements of the game:

The goal of the game is to capture and “evolve” the Pokémon creatures into more powerful versions of themselves. This will enable the player to win battles against other players.

Players who have downloaded the Pokémon GO app on their phone are able to explore the streets, parks and communities around them in search of Pokémon through the app’s map. The map is a real map of the world with accurate streets and landmarks, but it has been enhanced to include the fictitious world of Pokémon embedded within it. When playing the game, players walk around while using the map, and GPS helps guide them to actual places where they can find and capture the Pokémon creatures on the app on their mobile device. Once a player is close to a Pokémon, the mobile app will notify the player so he or she can find and capture it by “throwing” Poké Balls at the creature.

The significance of the map

The most significant – and controversial – part of the Pokémon GO game is that enhanced, interactive map within the mobile app. The map drives everything in the game. In order to play the game, players cannot be at home in front of a screen – they must be out and about using the map to lead them to Pokémon. The map leads players to the PokéStops where they collect important items for the game, and to the virtual Gyms where players’ Pokémon can battle each other. The GPS even keeps track of how far a player has walked, which helps “hatch” the eggs that have been collected. (Eggs have a certain distance designation in order to hatch. For example, a player may have to walk 5 kilometers to hatch one egg, while another may require a 10-kilometer walk.)

Another important aspect of the map is that it was derived from a different game called Ingress, which was also developed by Niantic. While Ingress has a different type of game play, the technology of the map was adopted for Pokémon GO. What has been controversial is the inclusion on the map of places such as statues, churches, museums, parks, government buildings, sports complexes, and even retailer locations as well as other public places. This is important because all of the key elements of the Pokémon GO game tend to cluster around these public landmarks within the game map. There have been reports of oblivious game players rushing into a courtroom in the midst of a trial, and traipsing through sacred sites such as Arlington National Cemetery and the Holocaust Memorial Museum without respect for the sanctity of the locations. Additionally, there are possible privacy issues, as the game captures and could monitor players’ every move.

The significance to marketers

Despite these real issues, however, the game has not slowed in popularity since it was introduced. And since the launch, marketers have been clamoring to integrate their brands into the explosive growth of the game. Currently there are no formal ways to use Pokémon GO as a marketing device for brands. However, that hasn’t stopped innovative marketers from leveraging the game for profit. Below are some of the ways the game has been used to market brands:

Clearly, Niantic has plans to generate revenue from the game and marketers are eagerly speculating what form that may take. In fact, some enterprising individuals have looked at the code within the app and have discovered that McDonald’s has already been written into the coding of the game. This has created a lot of buzz in the marketing community as to how and when that coding will be activated on behalf of the McDonald’s brand.

Even without a formal marketing platform, most industry experts believe that the marketing opportunities will fall into two main categories:

Pokémon GO has already broken all the records in terms of consumer adoption and player activity. When there are that many people with a shared interest and behaviors, it becomes more than a fan base – it becomes a market. It is clear that we are just the beginning of this phenomenon, and we at Harmelin Media will keep you informed as to how this evolves, and moves into paid media and other marketing opportunities.

However, this is much bigger than Pokémon GO. Its mainstream, immediate adoption represents the coming of age for Augmented Reality. In this sense, Pokémon GO marks a cultural shift in how we interact with our everyday reality. The line between real life and digital life is becoming increasingly blurred, and we expect the blurring of those lines to accelerate over the next 12 months. Marketers need to be aware of this and prepare for the shifting paradigm.