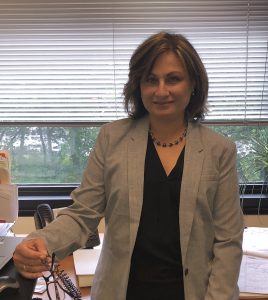 Vice President Irene Neveil came to Harmelin Media 15 years ago this month.  To celebrate her Crystal Anniversary, we sat down with her to get her view on how the industry has changed, her greatest achievements at Harmelin and to get to know her better.

2004 seems like ancient history when we think about how technology has so drastically changed the way we consume and curate our media choices. Facebook was only available to Harvard & other university students, and not to the public. There was no iPhone or personal assistant. We still watched appointment television, and on the weekend, rented DVDs. The rate of change over 15 years has been amazing, and we continue to embrace it and adjust along the way.

Client relationships are so important and I’m proud of the way I’ve been able to help our clients keep on top of changes in media to drive smart marketing decisions. However, there is something I consider a great success, and it has nothing to do with media world. Several years ago, I suggested we develop a Green Committee at Harmelin. Which meant, of course, that I was given the responsibility of developing such a group. Our initial goal was to ensure we were all participating properly with recycling, and it’s grown from there. Thanks to this effort and the full support of Harmelin, we have reduced our carbon footprint with recycling efforts (beyond sorting the trash), work-from-home flexibility, and participation in community tree plantings, clean-ups and more.

Where do you see the industry in the next year, 5 years, 10 years?

In the short term, we will be working with more vendors to develop true addressable TV campaigns. We are also starting to see an evolution in non-intrusive advertising. This coupled with the better targeting will make for more digestible and enjoyable advertising experiences.

These factors will open the gates to more opportunity to drive greater engagement and more measurable success for our clients. Over the long term, we will be even more data-driven in all channels, leading to attribution that drives media optimizations and sales.

What is the most unique trip you have ever taken?

Last year when I traveled through Europe with my husband, we spent a day in Liverpool. It turned out to be incredibly fun. We toured the old stomping grounds of John, Paul, George and Ringo, visiting the sites celebrated in their music while learning the backstories. Then we spent several hours enjoying the music of local artists and partying with other tourists in the Cavern Club.

What is your favorite song, movie or TV show, and why?

Besides Game of Thrones? My favorite TV show of all time is The Sopranos. It was groundbreaking in terms of the storyline and format (basically a movie, played out in a season of one-hour episodes). It showed the dark and violent side of a mafia family but also showed the human side. It featured Tony, the original anti-hero, with his mental illness. It also showed us what it’s like to be raised by and to be married to a mob boss. The entire cast was basically unknown at the start, but hugely talented actors who we grew to love. I re-watched the entire series a few years ago and may do it again one day.

Work Hard & Play Hard. I enjoy the hard work, and always like to know there is something fun planned in my near future.

In her 15 years at Harmelin, Irene has made a significant impact on her co-workers.

Jen Harlacher, EVP,   has nothing but the highest praise for Irene, saying “I have worked alongside Irene for 15 years here at Harmelin, and I am impressed by her well-rounded media knowledge, her inquisitive approach to strategic planning and her willingness to embrace the ever-evolving media landscape.  Irene takes tremendous pride in the work she does every day.  She is the consummate media professional.  Thank you!!!”

Lisa Glass, Media Director, who has worked with Irene for 8 years, affectionately notes that “People are drawn to Irene by her keen sense of humor, which she balances so well with her professionalism and strong work ethic.  She leads our team with a cooperative spirit, sharing her vast industry knowledge and bringing guidance to every project we work on.”

Maggie Fogarty, Media Director, reflects “I’ve had the absolute privilege of working alongside Irene for the past 10+ years of my career. Not only is Irene a true media maven, but she is a genuine example of women’s empowerment and she has certainly inspired and encouraged me to be the full-time working mother that I am today. I will always value, appreciate and respect the guidance and expertise that Irene continues to teach me every day.”

Congratulations and thank you, Irene, for 15 years of dedicated service and driving Harmelin clients’ successes.