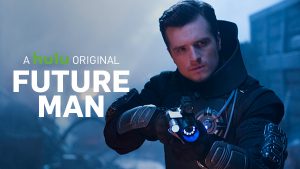 Hulu’s upfront took place a week after the wildly successful premiere of its original program The Handmaid’s Tale.  CEO Mike Hopkins explained how “there’s a lot of momentum and exciting things happening across the board at Hulu this year” including doubling its original programming. In addition to a second season of the Emmy-nominated The Handmaid’s Tale, and the final season of The Mindy Project, several new shows will be released with names that many people will recognize.

Future Man is a time-travel comedy premiering this summer produced by Seth Rogen and Evan Goldberg. It stars The Hunger Games’ Josh Hutcherson playing a janitor who beats an unbeatable video game, and is chosen as the savior to rescue the world from its upcoming demise. The Looming Tower, starring Alec Baldwin and Jeff Daniels, is based on Lawrence Wright’s Pulitzer Prize-winning exposé about 9/11 and the rise of al-Qaeda.  Castle Rock, from J.J. Abrams and Stephen King, will reimagine King’s characters and themes centered around the fictional Maine town in many of his novels. I Love You, America is a new weekly comedy from Funny or Die hosted by Sarah Silverman, and is produced by  Will Ferrell and Adam McKay. The show looks at people from both sides of the political spectrum and everyone is the same, no matter which way you lean.   Other original Hulu dramas are Marvel’s Runaways, from Gossip Girls creators Josh Schwartz and Stephanie Savage, and The First, about the first human mission to Mars, created and written by House Of Cards’ Beau Willimon.

Exclusive streaming video deals are still Hulu’s main area of success.  Hulu announced that it has acquired exclusive SVOD rights to the breakout NBC hit  This Is Us. The company’s recent acquisition of exclusive streaming rights to beloved sitcom The Golden Girls is already resonating with viewers. “We knew it was going to be big, but it’s exceeded our expectations,” says Hopkins.

One of the bigger announcements at the event was that, starting this fall, they will launch Hulu Live TV with 50 channels for $39.99 a month. In addition to their normal programming, Hulu will be offering live TV viewing, as it airs content for all four of the major broadcast networks – ABC, CBS, NBC and Fox – as well as major cable networks including CNN, ESPN, and MSNBC.